Close your eyes with me for a moment,

And imagine yourself sitting outside the board room of one of the largest retail chains in Australia. Maybe you’re nervous, sitting there fidgeting with your pen. Or perhaps you’re a slick operator, sitting in a calm silence. Either way, you know this isn’t going to be a fun meeting. You are about to break some devastating news to the CEO and Owner. To make it worse, this is a man not known for his patience or good nature.

Finally, the door opens, and your name is called. You walk in and greet the room.

As a seasoned professional, you warm the room up with some good humour and your positive findings.

“The projects are delivering well. Systems and processes are, on the whole, on track.”

…Then you break the news.

“The expected financial benefits across the portfolio were over estimated. By a factor of 2 to 1.”

There is silence… An awkward stillness fills the room. Then your intuition detects something. Your brain switches to slow-motion as you hear a noise. A ‘whooshing’ noise that seems to be getting louder. Then you start to see it out of the corner of your eye… …a shiny object comes hurtling at your head.

What do you do?

Tell me, would your first reaction be to duck? Because if so, then you may well have been as lucky as a friend of mine was in this exact situation. He too managed to dodge the glass jug that was thrown at him by this short-tempered CEO. My friend’s quick reactions saved him from a potentially large hospital stay, reducing the damage to just a broken water jug and a cracked window…

This is a story of a CEO who deeply understands that every change initiative is an investment. The feeling was particularly acute for this man as it was his personal wealth that was invested with the organisation. Where this CEO missed the mark though, (well aside from the physical violence), was that he got so caught up in the financial return.

And this is how we arrive at


One of the Most Common Mistakes I See Change Leaders Make: The Money Trap.

Because each change initiative is an investment, many change leaders get caught in the trap of always expecting a money-based return.

Change leaders often get caught up in purely mathematical exercises to demonstrate the millions of different ways that their organisation will be more efficient after the project delivers its work.

To give you an idea of what I mean when I say ‘purely mathematical exercises’, here’s an example.

In 2006 the Australian New South Wales State (NSW) Government Department of Education started one of its largest undertakings ever – the Learning Management and Business Reform project (known more widely as LMBR). The LMBR project was inherently ambitious in nature. It aimed to replace a 15-year old cluster of expensive and no longer suitable backend and learning management systems across the Department itself, 2230 public schools and its vocational TAFE[1] sites.

Unfortunately, the real life LMBR never achieved true Value clarity. They got caught in the money-trap, requiring $Millions in imaginary cost savings. By imaginary, I mean that their armies of (expensive) consulting graduates would come up with creative ways to demonstrate value for the project. One of which was this idea that the LMBR program would save several minutes per day of every staff member – which, when added up creates a nice big number.

The problem is that it’s a number that isn’t real. You can tell it’s not real because not a single budget or forecast would, or should, be adjusted using it.

In reality that staff member would probably just spend those minutes making an additional cup of tea!

This is what happens when a change leader treats their responsibility to prove change success as a ‘tick and flick’ exercise. When a change leader forgets their burden of proof responsibility, they can list as many imaginary project benefits as they like. After all, if there’s no need to prove it, then a nice long list of benefits makes their project look so much better!

Interestingly, this trap can often take on a different guise in the Government and NFP sectors: it’s the dangerous thinking that “We aren’t profit-driven, so we don’t need to prove we invested the money well”.

The reality is that value doesn’t always come in the form of tangible cost savings or increased revenue. Sometimes an organisation wants to shift its culture, or stop using an out of support IT system, or improve its customer experience, or make some other shift to set itself up for the future. There are also times when an organisation isn’t focused internally – perhaps it’s investing for the betterment of a vulnerable community or other philanthropic goal.

The key to all these elements is that a project needs to be solving an organisational need or desire. The trick is figuring out what it’s going to do to solve it, and how it’s going to prove it has done so.

A truly Valuable Project backs its WHY with the tactical plans on how it will prove it has achieved its WHY…It’s just that that proof doesn’t, and shouldn’t have to be cold, hard cash. 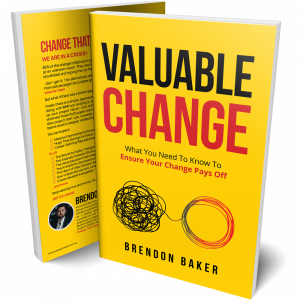 This is a sneak peak from Valuable Change: Everything You Need To Know To Ensure Your Change Initiatives Pay Off