Why No One Is Following Your PMO Processes (And How To Overcome It!)

Previous Next
Why No One Is Following Your PMO Processes (And How To Overcome It!)

Would You Do Business With You?

It’s time to pivot your thinking.

Rather than considering the processes and systems you have in place as ‘what your PMO does’, try considering them as ‘services’ you are offering your internal clients.

Then ask yourself — would you choose your offering over competing services on the open market?

Either way – you are now thinking with the new frame of mind that you need to truly create a High Value PMO and embed it within your organisation.

Thankfully, the Value Equation is nice and simple. It’s 2 columns: 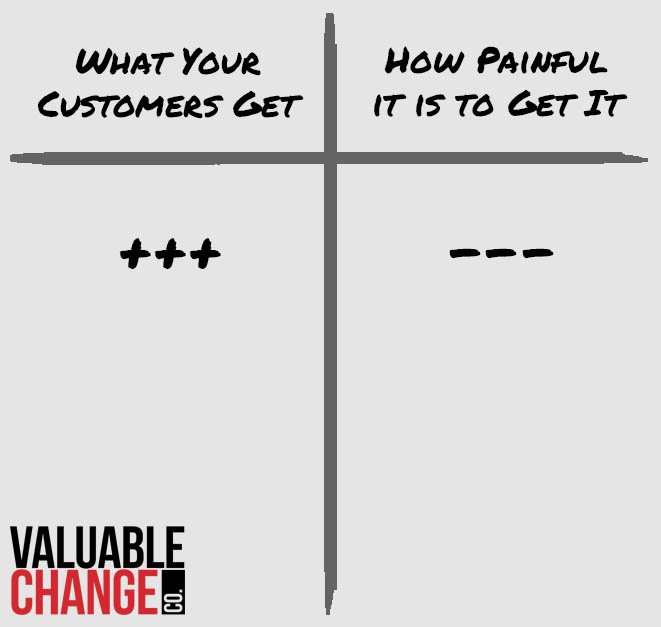 Clearly you want more pluses and less negatives, but there’s some interesting science behind it…

The Interesting Science Behind It

Over the last half century behavioural studies of those suffering from chronic pain have found that we humans will actively avoid any activity that we fear will result in a painful experience.

However, in 2012 a group of behavioural scientists at Ghent University in Belgium felt that the current pain-avoidance thinking was too narrow. They hypothesised that the findings to date on pain-avoidance were sorely[1] one sided; and that the decision to avoid or persist with a painful activity is likely affected by the level of motivational conflict at the point of decision.

In short – they wondered if we only avoid pain when we don’t have a good enough reason to endure it.

So, they put together an experiment[2], and like all good experiments, it included zapping people with electricity. After gaining approval from the Ghent University’s ethical committee – they were good to go.

The 56 undergraduate students that volunteered to participate in the experiment were promptly split into two groups.

The first group of poor souls were the ‘control’ group. Their job was to demonstrate that undergraduate students were also pain adverse. They were strapped into a device that asked them to complete a series of simple number and letter based tasks. The catch was that on completion of 50% of these tasks, the participant received a mildly painful electro-shock. As you would expect, the group completed very few of these tasks.

The result: The second group willingly completed far more of the pain-inducing tasks.

If we translate this experiment into our Value Equation, the reason for this result becomes obvious. We end up with a Value Equation that looks something like this: 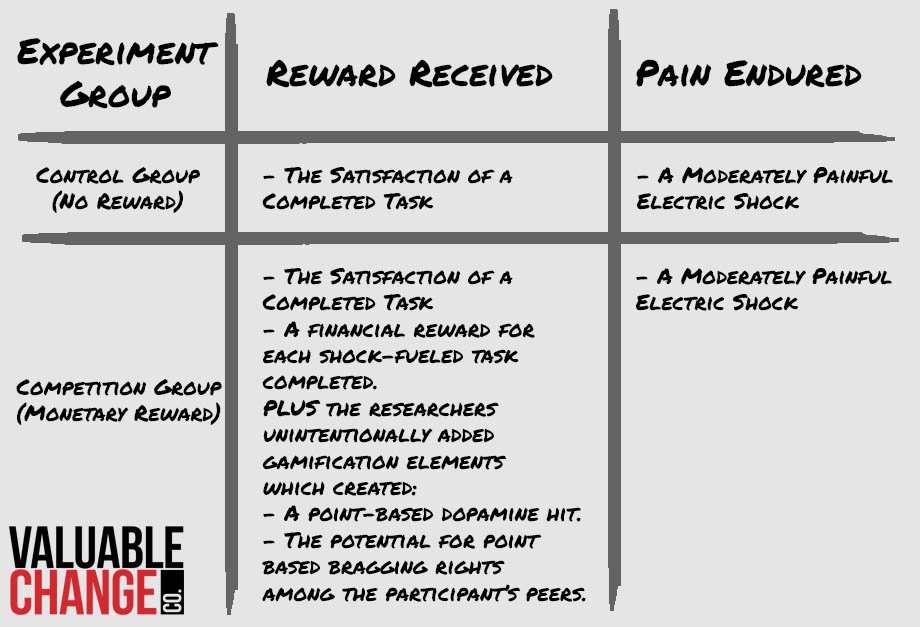 Simply put – there was a high task completion rate by the competition group because the value equation was balanced back towards the Reward Column. Completing the tasks and enduring the pain became ‘worth it’.

Let’s bring this back to PMOs.

Why PMOs Suffer from Adherence Issues

Almost every PMO I’ve worked with has suffered with adherence issues at one stage or another. The good news is I can tell you exactly what’s going wrong.

As you might have already guessed, it’s got to do with the Value Equation. Most PMOs build processes that look something like this:

Or perhaps we should look at one of the most ignored aspects of project management I’ve ever come across – Lessons Learned. Most organisations just shove ‘Lessons Learned’ into their project closure reports – which then get filed away and forgotten about.

What are the chances we are getting good adherence or high-quality content in there? Let’s look at the Value Equation for it. 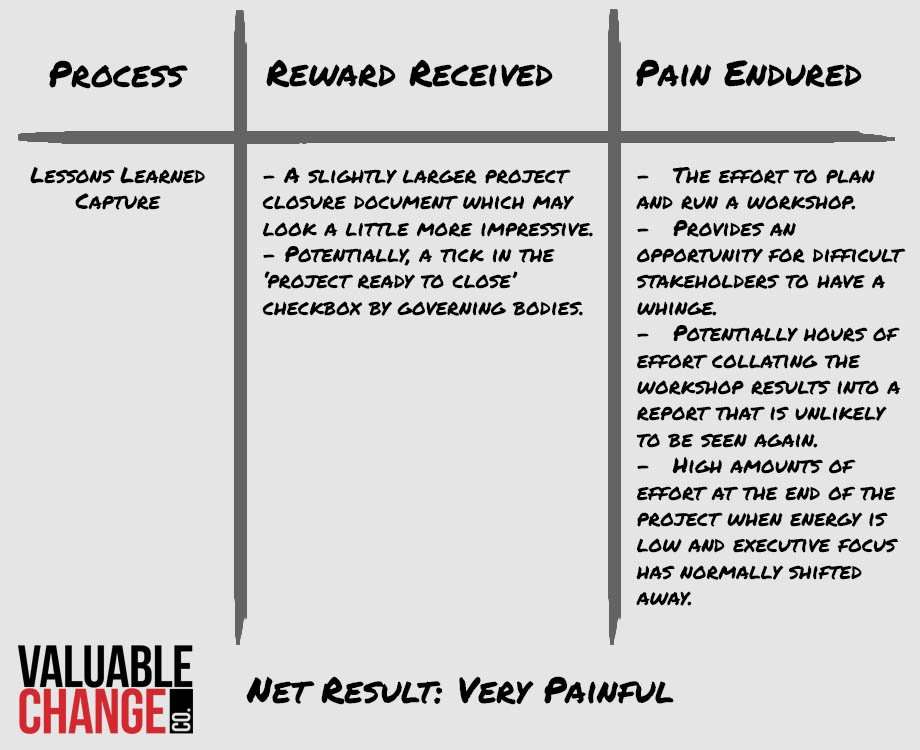 Looking at the Value Equation – we start to see why most projects just tend to fade away rather than close and reflect. The value proposition is usually a deep negative.

We can use the information from our client clarity work to stack our Value Equations towards our clients. Your aim here is to create a balanced and more rewarding solution for them.

Let’s have another look at the project reporting example we used earlier. Except, this time, let’s assume this PMO has entered the High Value Service cycle (and is therefore continually improving their service offering), while ensuring ongoing focus on their Clients’ success.

Their Project Reporting Value Offering may look something like the following. For the Executives, the Value Equation is nice and strong. 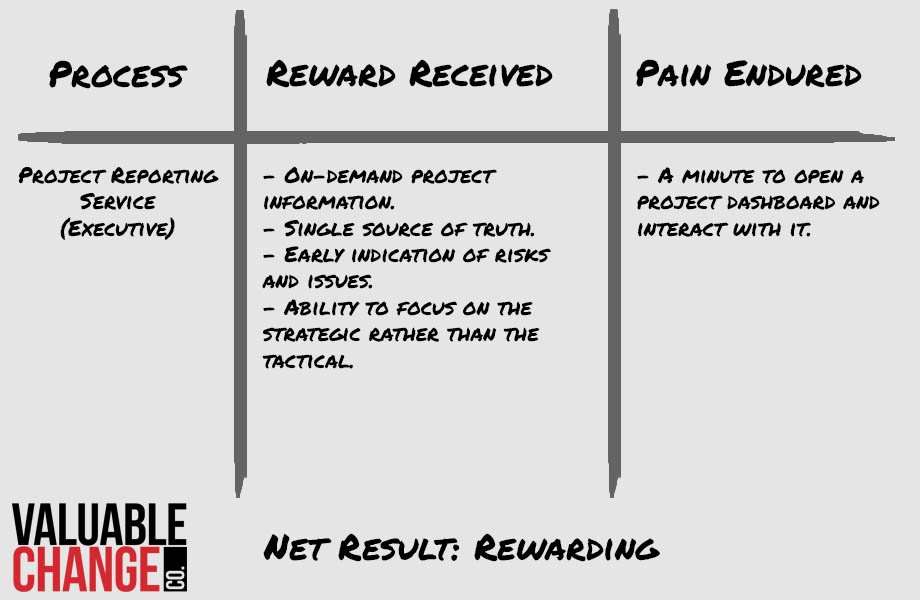 For the Project Managers, the Value Equation is similarly net Positive. 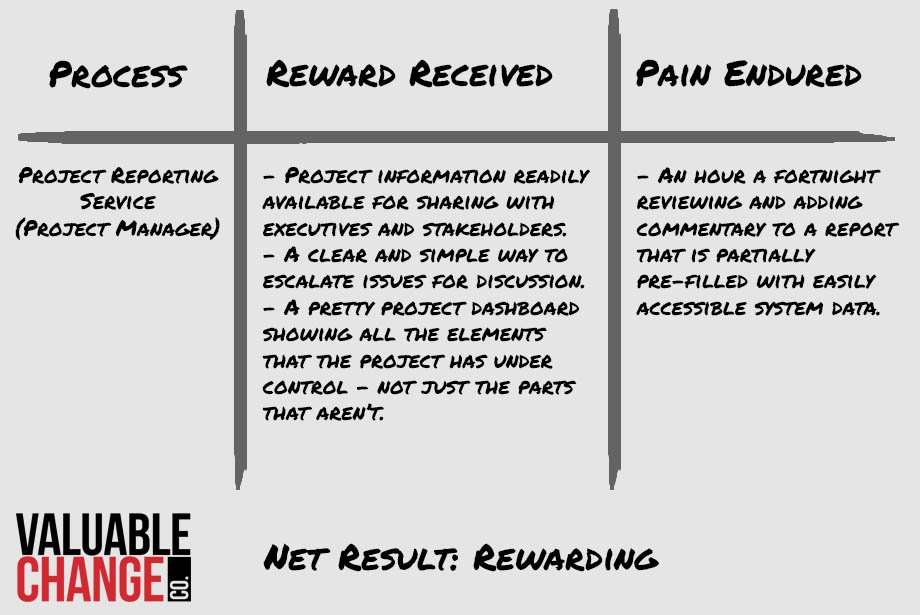 There are a few things you may notice here.

First, the process was renamed. It’s now called the Project Reporting Service. The PMO in this example has shifted its focus from ‘command & control’ to service-centred. It now views reporting as one of the many ways it serves its client base. Like a vendor, it is therefore continually looking for ways to:

For this PMO, this focus led to the purchase of an off-the-shelf project reporting toolset. The off-the-shelf solution automatically pulled information from disparate project sources so that the Project Manager and PMO didn’t have to.

Second, the ‘Reward’ columns now outweigh the ‘Pain’ columns. This is because the PMO designed this service offering with the Value Equation in mind. It also focused on approaching the projects with a ‘high trust’ viewpoint. This changed the relationships with their project managers. It also reduced cumulative workload as it reduced the time it took to follow up reports.

Ultimately – this PMO shifted the tables from a net negative to a net positive. Any guesses on what this did for its adherence?

…If you guessed that it improved, then you would be correct.

So, how do your PMO services stack up?

[1] Excuse the pun, I couldn’t help myself

This is a excerpt from Creating High Value PMOs: Your Essential Guide. 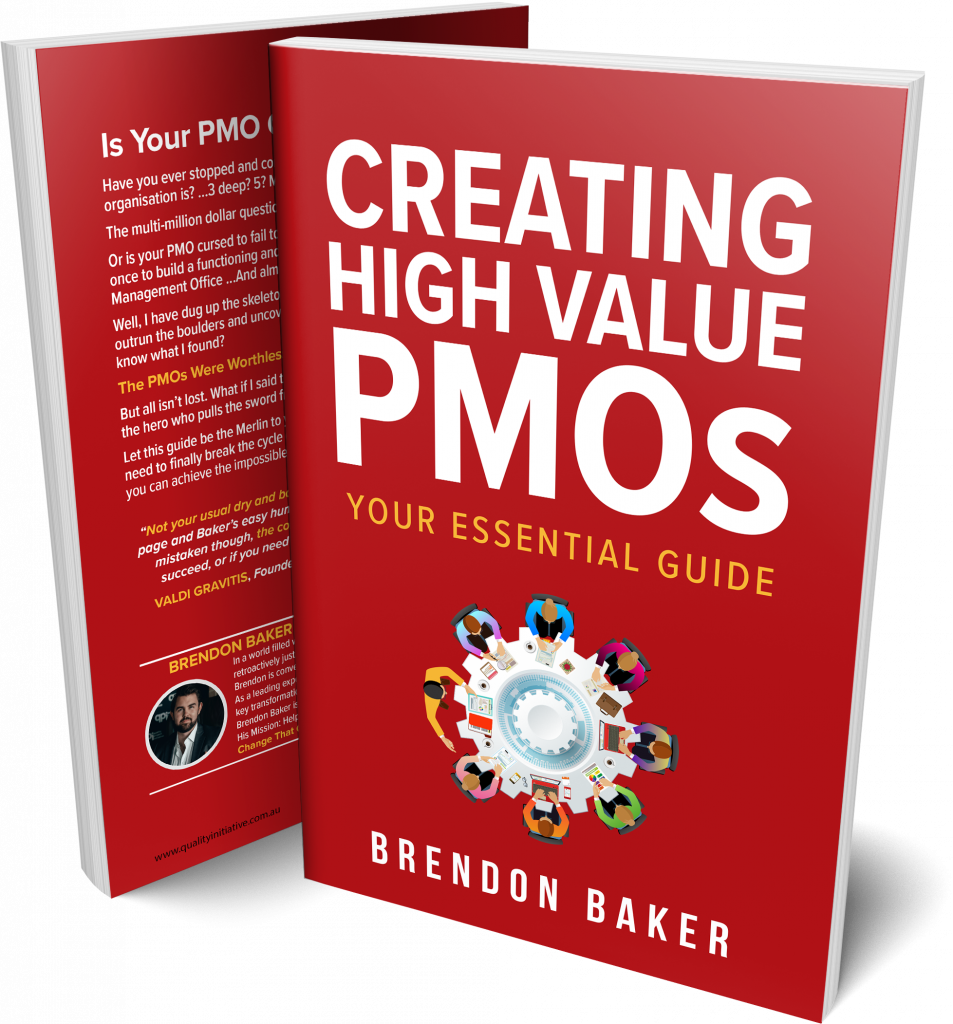